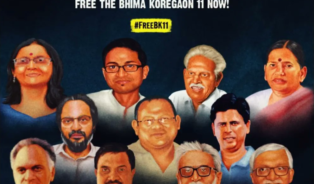 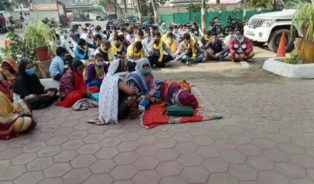 MP: 8 Months Pregnant Woman Miscarries Following Alleged RSS Attack on Tribal Village, No FIR Even After 2 Weeks  Photo: News Click An eight months pregnant tribal woman reportedly miscarried after a group of men, allegedly from the Rashtriya Swayamsevak Sangh (RSS), attacked a tribal village in Madhya Pradesh's Barwani district in suspicion of religious conversion and kicked her stomach. The incident occurred on December 31 afternoon at Devra village of Thikri tehsil, 50-km away from the district headquarter, when a mob of 25-30 people, armed 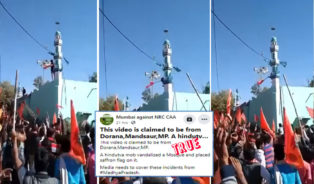 Mandsaur Police Lenient with Hindutva Goons Who Vandalised Muslim Properties, Mosque, Say Locals Photo: Screengrab The Mandsaur Police in Madhya Pradesh is not taking strong action against those who were involved in violence, vandalism and looting of property during the violent bike rally taken out by Hindutva groups last week, say the locals. "The police held some people in connection with the incident but released them later. We don't think that the police are going to take strong action against them. We are not satisfied with 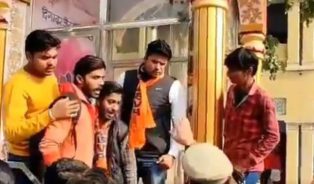 "UP Epicentre Of Politics Of Hate": 104 Ex-IAS Officers To Yogi Adityanath  Photo: NDTV The Uttar Pradesh government's controversial anti-conversion ordinance has transformed the state into "the epicentre of politics of hate, division and bigotry", a letter signed by 104 former IAS officers, including former National Security Adviser Shivshankar Menon, former Foreign Secretary Nirupama Rao and former Adviser to the Prime Minister TKA Nair, and released Tuesday said. Demanding that the "illegal ordinance be withdrawn forthwith", the signatories also said all politicians, including the Chief Minister, 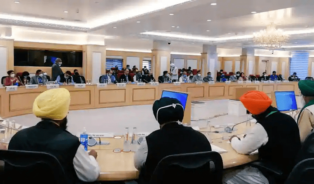 After Bank Seeks Details of Foreign Donations, Farmers' Union Accuses Govt of 'Intimidation' Photo: HW English The foreign exchange department under the Punjab & Sind Bank has sought details of foreign donations made to the general secretary of the Bharatiya Kisan Union (Ekta-Ugrahan) Sukhdev Singh Kokrikalan, who has been agitating against the government's farm laws for over four months now. BKU (Ekta-Ugrahan) is one of the largest farm unions agitating against the government, with more than one lakh people gathered at the Tikri border under its 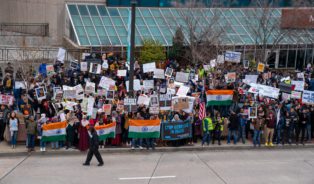 Hundreds of Indian Americans protest across United States, demanding repeal of farm laws as well as CAA  Photo: IAMC The "Coalition to Stop Genocide in India", a broad coalition of Indian American and US-based civil rights organizations organized protests on December 12, 13 and 15, in several cities across the US demanding repeal of the pro-corporate farm laws as well as the draconian Citizenship Amendment Act (CAA) and the National Register of Citizens (NRC). The protests were organized in Austin, Atlanta, Dallas, Boston, New York City, 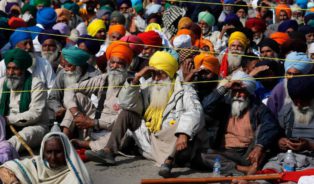 Politicians from Australia, UK attend roundtable on whether India is becoming a fascist state Photo: The Caravan On 1 December, the Indian foreign ministry reacted sharply to comments by the Canadian prime minister, Justin Trudeau,… On the same day, Janet Rice, an Australian senator, addressed the country’s parliament and called the Rashtriya Swayamsevak Sangh a “fascist organisation.” Five days earlier, on India’s Constitution Day, she attended a roundtable discussion on the question, “Is India becoming a fascist state?” The roundtable was jointly organised by Amnesty International 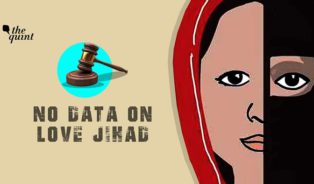 The hateful love ‘jihad’ conspiracy in India is going mainstream - By Rana Ayyub Photo: MANJUNATH KIRAN AFP In the year preceding the national elections in India in 2014, when Prime Minister Narendra Modi rose to power, India witnessed a brutal episode of communal carnage in the state of Uttar Pradesh. More than 60 people were killed, women were gang-raped, and more than 50,000 people were displaced, a majority of them Muslims. The violence was triggered by false rumors of a "love jihad"…. In recent weeks and

Islamophobia in India bound to lead to genocide of Muslims, warn experts  Photo: Muslim Mirror "We are often told of the stages that the genocide process involves, but it is very alarming that India has been undergoing persecution at all these genocidal stages in different areas of the country," said Zahir Adil, lead of Justice For All's Save India From Fascism project. Justice for All (JFA) held a virtual panel at the 3rd Ministerial Conference to Advance Freedom of Religion or Belief on Wednesday (Nov.18, 2020). 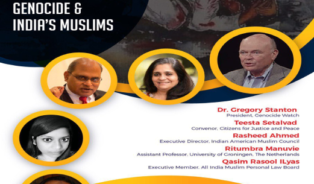 Designate India a “country of particular concern”: Global human rights activists Photo: IAMC Leading American and global human and civil rights activists came together on Monday to reinforce the demand to designate India as a “country of particular concern” to prevent and combat ongoing persecution of its religious minorities. The discussion was organized by the Indian American Muslim Council in collaboration with Hindus for Human Rights, Students Against Hindutva Ideology, Dalit Solidarity Forum, India Civil Watch International and International Christian Concern. Anurima Bhargava, the vice-chair of