The lawsuit named Indian American Muslim Council Executive Director Rasheed Ahmed as one of the defenders.

In the articles written by journalist Raqib Hameed Naik, which were published in 2021, the defendants stated that Hindu American Foundation, along with four other US-based Hindu groups, has “ties to Hindu supremacist and religious groups,” labeling HAF as one of five “US-based front organizations for Hindutva, the supremacist ideology that is the driving force behind much of the persecution of Christians, Muslims, Dalits and other minorities in India.” 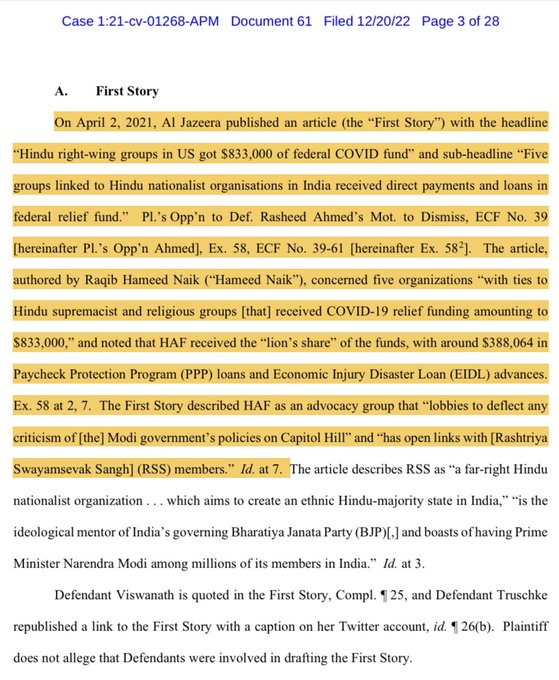 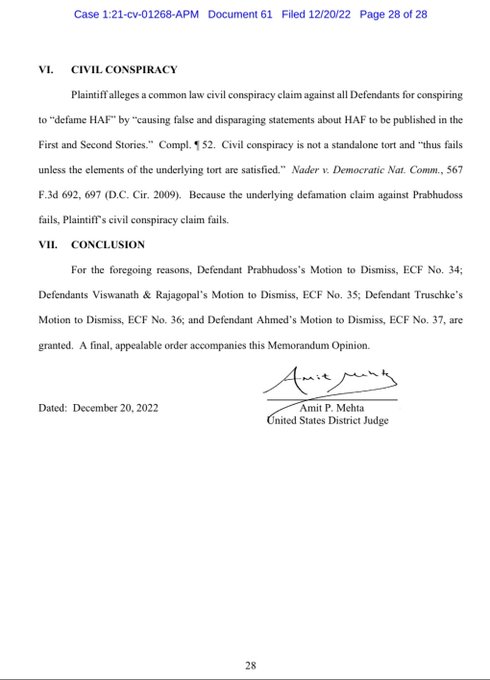 The verdict stated that the court “cannot plausibly infer that any of their [Truschke and others] statements were made with actual malice.”

India’s Home Minister and Bharatiya Janata Party (BJP) leader Amit Shah declared that “no mercy” would be shown towards NGOs who seek to “change the demography of the country and create societal disturbances through foreign funding,” referencing a number of groups that work to support human rights and religious minorities, including Christian-run charities.

Shah further threatened groups who receive foreign funding without approval through a draconian law, the Foreign Contribution (Regulation) Act (FCRA), which has led to the shutdown of several minority-run charities and human rights groups, including Amnesty International’s India offices.

“For those who don’t abide by the FCRA, strong action will be taken against them. There will be no mercy to them,” Shah said. “Flow of funds from foreign lands cannot remain unmonitored… This is Narendra Modi’s government. We will not allow any funds to come to destroy the country.”

The FCRA was repeatedly criticized by a number of democratic nations at the United Nations’ Universal Periodic Review of India. The United States, Australia, Germany, Ireland, South Korea, and Slovakia all called for either the repeal or the amendment of the FCRA.

Despite a clear violation of the law, the High Court of Madhya Pradesh state dismissed a plea challenging the election of a BJP leader, Pragya Thakur, blatantly ignoring the fact that she is one of the prime accused in a terrorist bomb attack in 2008 and used anti-Muslim hate speech to win the election.

The petition, filed by Bhopal resident Rakesh Dixit, stated that Thakur had made “communal speeches and incited religious sentiments” during her election campaign, which violates Section 123 of the Representation of the People Act.

However, the court ignored Thakur’s extensive record of hate speech and incitement of violence, failing to hold her accountable for using Hindu supremacist rhetoric to demonize Muslims and drive Hindu residents to vote for her.

Thakur is one of six persons facing trial in the Malegaon blasts case, during which six persons were killed and 100 injured when an explosive device went off near a mosque in north Maharashtra’s Malegaon city in 2008.

That Thakur is able to retain her political power despite facing trial for a terrorist attack is an indication of the way India’s judiciary has become compromised by the Hindu supremacist movement.