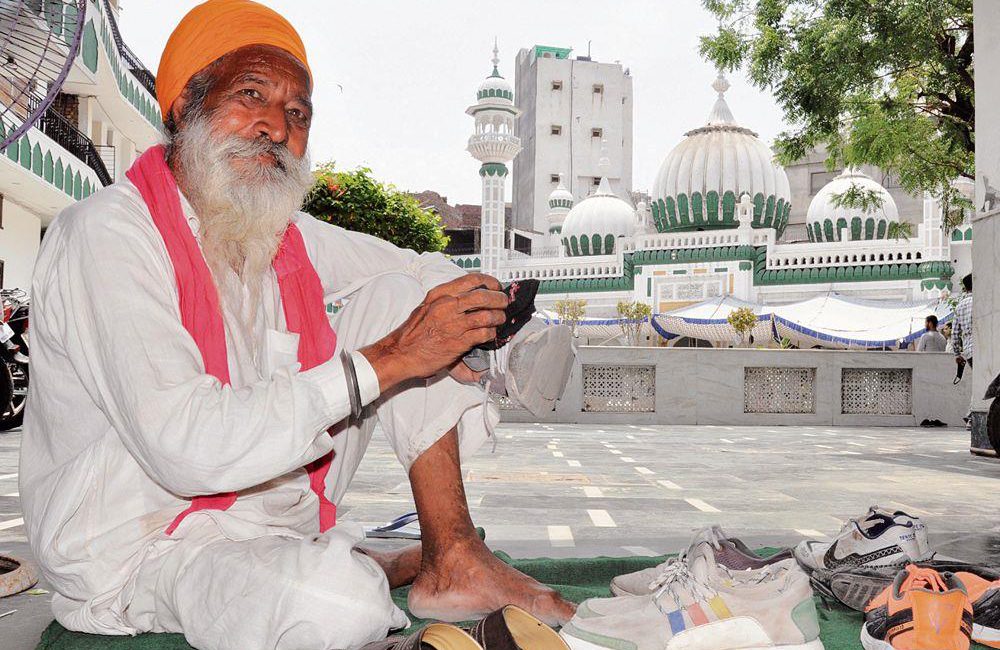 For 40 yrs, Sikh vendor performing sewa at mosque in Amritsar

A mosque in Amritsar has a rare ally. Baljinder Singh (60) has been doing ‘sewa’ at Khairuddin Mosque located in the narrow lanes of the walled city in Amritsar known as Jama Masjid.

Baljinder has been doing selfless service of taking care of ‘jodas’ (footwear) of Muslim devotees during every Friday prayers held in the mosque.

“I am a Sikh by birth and secular by nature. For me humanity is above any religion. Choosing to serve in a mosque was my way of propagating Guru Nanak’s universal message of brotherhood and harmony,” he said.

Popularly addressed as “Bha ji” and “Sardar ji”, Baljinder Singh said the service at the mosque has been a routine for him since 1980s. He said, “I take care of their shoes, while they offer prayers inside with a carefree mind.”

He said his ancestors had performed ‘joda’ sewa at Chaurian Paudian Jodha Ghar at the Golden Temple from Atta Mandi for 90 years. “Doing sewa is actually in my blood. I also do joda sewa occasionally at Baba Shayam Singh Dera at Atta Mandi Chowk during sangrand and at a temple at Majith Mandi during Krishan Leela programme,” he said.

When asked what he gained from sewa, he said, “Just an inner satisfaction. In return, I get blessings from devotees which are pure in nature.”

A vegetable seller by profession, he said: “Every Friday, I finish my assignments early in the morning so that I can get free by afternoon to reach the mosque. I do sewa till the culmination of prayers.”

“I hardly missed a single occasion here since the past four decades. If I am away to attend any social or domestic exigency, my son Baldev does sewa on my behalf at the mosque on Friday,” he said.

He has two sons — Baldev Singh, who helps him in his grocery trade, and Varinder Singh, who is settled in Malaysia. “I have never seen any person with so much selfless devotion in my life,” Imam of Jama Masjid Maulana Hamid Hussain said