IAMC testifies before Congressional Human Rights Commission on "Challenges and Opportunities: The Advancement of Human Rights in India" - IAMC

IAMC testifies before Congressional Human Rights Commission on “Challenges and Opportunities: The Advancement of Human Rights in India”

IAMC’s testimony, delivered by its Communications Director, Mr. Musaddique Thange, was a forthright exposition of the role played by India’s current administration and its espousal of the divisive Hindutva ideology in brutal human rights violations of religious minorities. The testimony included recommendations on how the US could play a constructive role in improving the situation while respecting India’s sovereignty.

The hearing, chaired by Rep. Joseph Pitts (R-PA) and Rep. James McGovern (D-MA), sought to “provide concrete recommendations for how U.S. policy makers can most effectively encourage the protection of human rights given the strategic importance and continued growth of the U.S. – India bilateral relationship.”

Mr. Musaddique Thange, Communications Director of IAMC provided oral testimony to the commission and submitted a written testimony detailing the systematic erosion of the legacy of respectful coexistence of many faiths. In a passionate plea to the commission, Mr. Thange called for human rights to be included as part of the annual US-India Strategic Dialogue and called out the ineffectiveness of the Indian judiciary as enabling and perpetuating the human rights violations.

The written testimony also recommended the recognition of the work of the vast network of NGOs that are at the forefront of upholding the constitutional values despite persistent targeting and harassment by the Modi led government. It also appealed to take up at the highest levels of government, for USCIRF and other institutions to be able to freely assess the situation in India first hand, without any hindrance from the government of India.

Congressional Letter to Speaker on Human Rights in India

In a separate development, eighteen members of the United States Congress led by Rep. Trent Franks and Rep. Betty McCollum wrote a letter to Speaker Paul Ryan urging him to take up the issue of rapidly eroding religious freedom in India.

“Human rights groups in India have reported extensively on these types of attacks, and have traced many of them to Hindu nationalist groups and to government officials supportive of those groups.  As a result of those groups and officials supporting extremists, Muslims, Christians, Sikhs and other religious minority communities continue to experience incidents of discrimination, intimidation, harassment and violent attacks. Unfortunately, because of India’s current climate of impunity with regard to such attacks, many victims may never receive justice.” asserted the congresspersons in their letter. 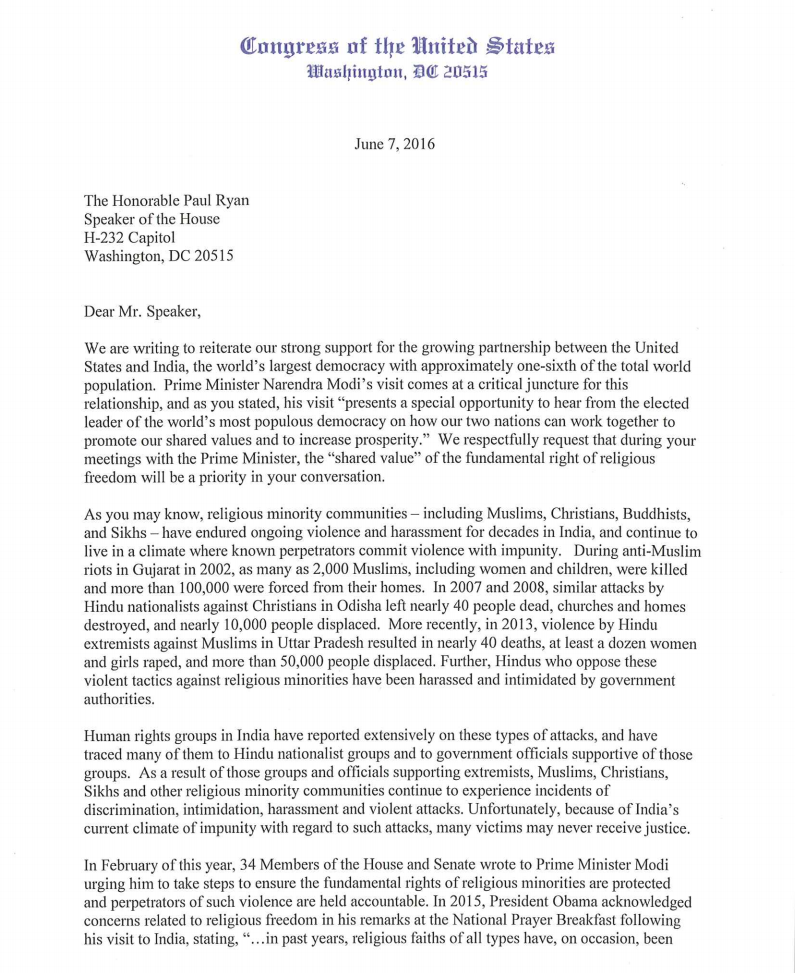 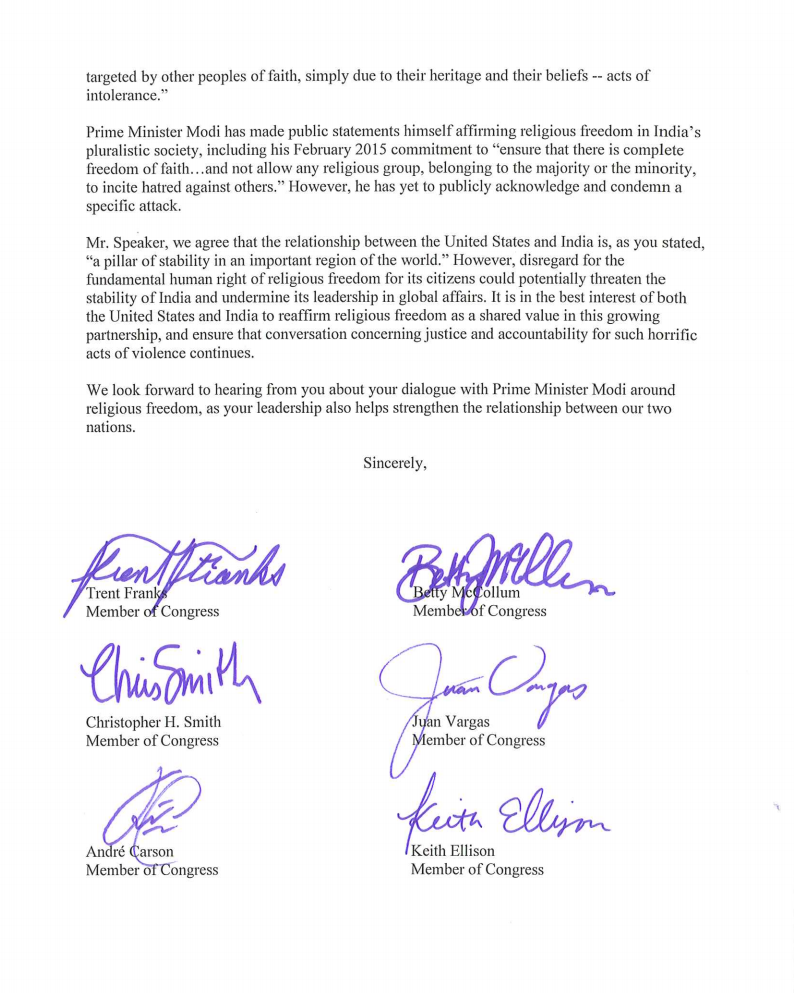 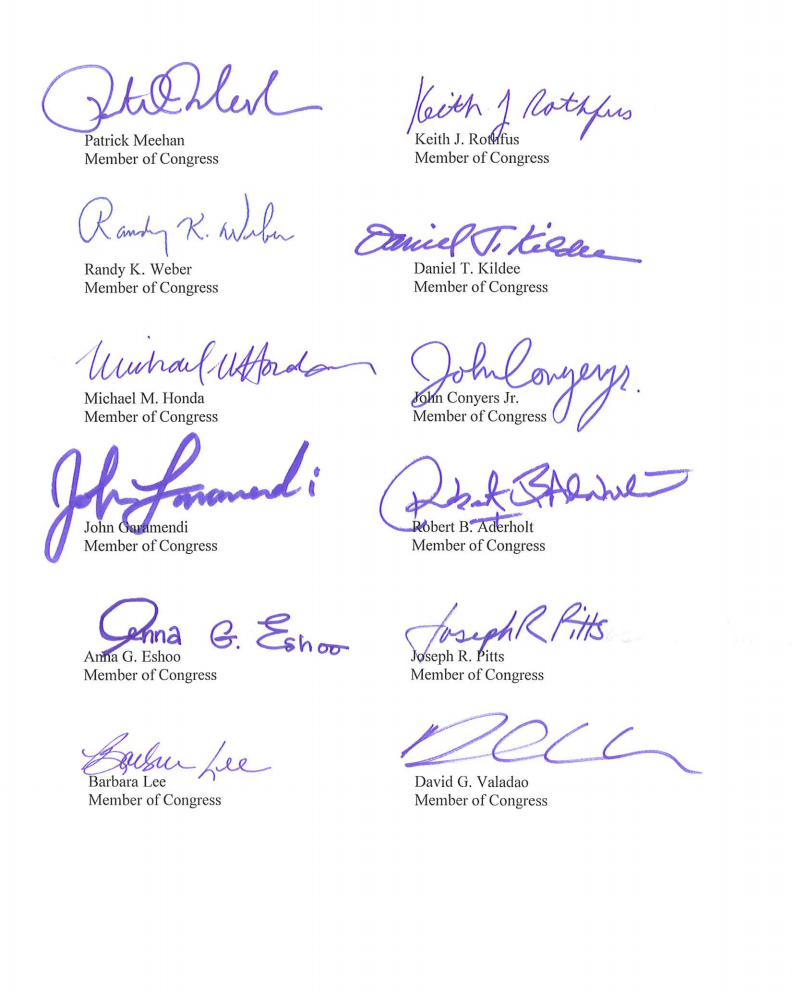 “In February of this year, 34 Members of the House and Senate wrote to Prime Minister Modi urging him to take steps to ensure the fundamental rights of religious minorities are protected and perpetrators of such violence are held accountable. In 2015, President Obama acknowledged concerns related to religious freedom in his remarks at the National Prayer Breakfast following his visit to India, stating, ‘…in past years, religious faiths of all types have, on occasion, been targeted by other peoples of faith, simply due to their heritage and their beliefs — acts of intolerance.'” the letter further stated.