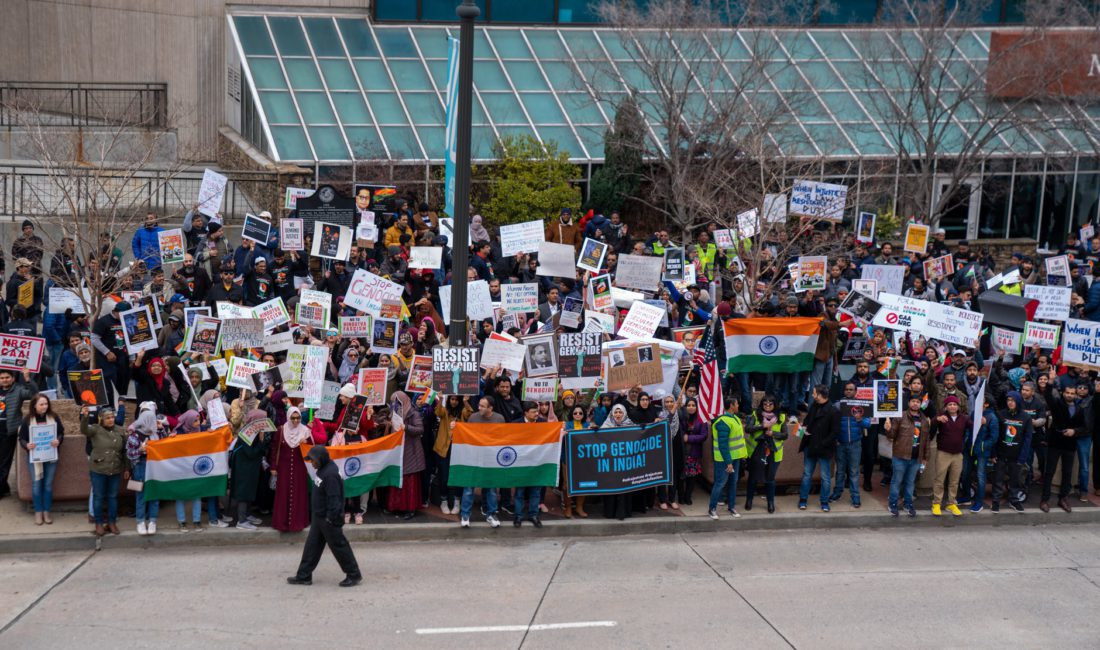 The “Coalition to Stop Genocide in India”, a broad coalition of Indian American and US-based civil rights organizations organized protests on December 12, 13 and 15, in several cities across the US demanding repeal of the pro-corporate farm laws as well as the draconian Citizenship Amendment Act (CAA) and the National Register of Citizens (NRC). The protests were organized in Austin, Atlanta, Dallas, Boston, New York City, Raleigh, Seattle, Chicago and several other cities by the diaspora community and the coalition partners included the Indian American Muslim Council (IAMC) and the Boston South Asia Coalition (BSAC). The protests were attended by hundreds of Indian Americans who braced freezing temperatures in some cities to express solidarity with protesting farmers and citizens in India. Loud cries of ‘Sadda Haqq ithe rakh’ (Give us back our rights) and ‘No Farmer, No Food’, rang out at the Dallas City Hall in Texas, the venue of protests by members of the Sikh community, to support the ongoing farmer protests in India….

Indian American Muslim Council (IAMC), an advocacy group dedicated to safeguarding India’s pluralist and tolerant ethos has welcomed the resolution passed by Alameda County in the state of California against the draconian Citizenship Amendment Act (CAA) and related initiatives such as the National Register of Citizens (NRC) and the National Population Register (NPR) that threaten to disenfranchise millions of Indian Muslims.… Ahsan Khan, the President of Indian American Muslim Council, said, the “resolution passed by Alameda County, is consistent with the values of the American and Indian democracies. And hence, I strongly believe that such opposition of various city councils to Indian government’s exclusionary laws, should be a model for the incoming Biden administration to follow and uphold.”…

Amid rising crimes in Bihar, yet another case of cattle-related mob lynching has taken place in Patna where a suspected cattle thief was beaten to death in the late hours of Wednesday. The suspected cattle thief was allegedly caught by an angry mob on FCI road under Phulwari Sharif, located on the outskirts of Patna, and was beaten so much that he fell unconscious and died on the way to hospital. The victim has been identified as Alamgir Alam, 28…. A local resident on condition of anonymity told NewsClick that the victim was tied to a wooden pole and thrashed for over four hours till he was half dead. Afterwards, Alam was left on the road under the open sky in the cold weather….

In India, Facebook Fears Crackdown on Hate Groups Could Backfire on Its Staff

Delhi Court Grants Bail to Muslim Man, Says Does Not Make Sense That He Would Collude With Hindu Rioters

One Year On, No Accountability for Delhi Police’s Terrifying Impunity at Jamia – By Nitika Khaitan

Has India Descended Into a Constitutional Theocracy? – By Rajshree Chandra