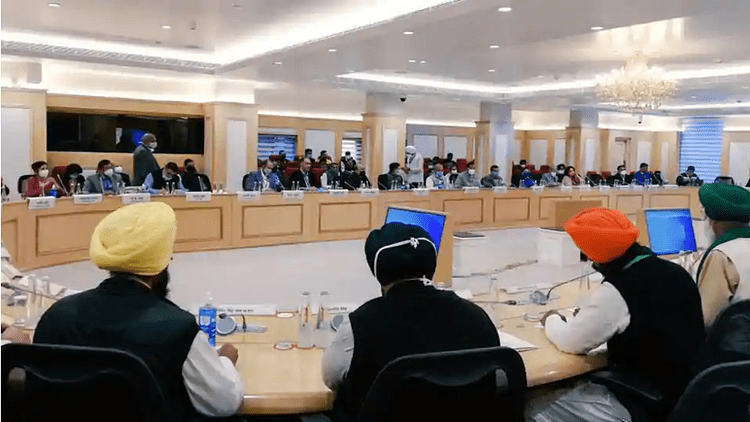 The foreign exchange department under the Punjab & Sind Bank has sought details of foreign donations made to the general secretary of the Bharatiya Kisan Union (Ekta-Ugrahan) Sukhdev Singh Kokrikalan, who has been agitating against the government’s farm laws for over four months now. BKU (Ekta-Ugrahan) is one of the largest farm unions agitating against the government, with more than one lakh people gathered at the Tikri border under its banner…. Speaking to The Wire, Mulk Raj Gupta, president of the Patiala Arhtiya Association said, “The raids were done only to inform us that we must not support the farmers or take a step against the government. That’s it. They just mildly checked our logbooks and told us to back off from the protests.” In defence of the I-T raids on arthiyas, the agitating farm union leaders have said that if ‘such intimidation by the government continues’ then farmers will gherao income tax offices across Punjab….

Bajrang Dal, the youth wing of Vishwa Hindu Parishad – an organisation of Hindu hardliners – took birth in 1984, as ‘rakshaks’ in the fight for Ram janmabhoomi. Now, it finds representation on Facebook, through multiple groups and pages, often at the intersection of misinformation and hate speech. A recent report by The Wall Street Journal (WSJ) found that social media giant Facebook refrained from taking action against right-wing groups Bajrang Dal, Sanatan Sanstha and Sri Ram Sena for hate-speech violations, fearing crackdown on its India operations…. In subsequent sections of this report, we will illustrate with some examples how these groups are not just spreading hate but are also relying on misinformation to target India’s minorities…. a quick search on Facebook for Bajrang Dal showed multiple groups and pages which existed in the name of the group and that reiterated the rhetoric of ‘Love Jihad’, ‘Hindu khatre mein hain’ and the need for a ‘Hindu Rashtravad.’…

The Special Cell of the Delhi Police on Thursday raided the office of advocate Mehmood Pracha in connection with its investigation into the large-scale communal violence that broke out in the Capital in February, reported ANI. Pracha has been fighting cases on behalf of many accused in the riots. The searches were carried out after obtaining a warrant from a local court, a senior police officer told The Hindu. Pracha said the investigators seized his computer and laptop….

Kashmir Votes, and India Hails It as Normalcy in a Dominated Region

Where Nationalism Has No Answers – By Yasmeen Serhan

The myth of love jihad, a ploy by the BJP to polarise society for electoral gains – By T.K. Rajalakshmi

Prejudice, not pride: What the sangh parivar stands for – By Ramachandra Guha