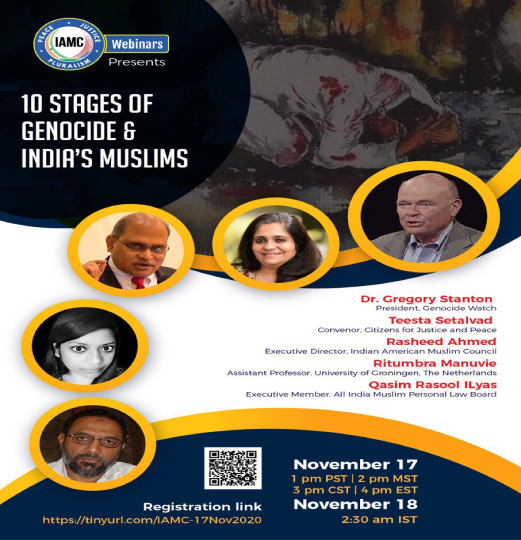 Leading American and global human and civil rights activists came together on Monday to reinforce the demand to designate India as a “country of particular concern” to prevent and combat ongoing persecution of its religious minorities. The discussion was organized by the Indian American Muslim Council in collaboration with Hindus for Human Rights, Students Against Hindutva Ideology, Dalit Solidarity Forum, India Civil Watch International and International Christian Concern. Anurima Bhargava, the vice-chair of United States Commission on International Religious Freedom (USCIRF), said that as an ally and as a friend of India, the United States “needs to take steps to make sure that India upholds the rights guaranteed to all of its citizens as enshrined in its own constitution.”… The recorded event can be found on IAMC’s YouTube Channel.…Read more

Human rights and political advocacy organisation The Humanism Project has released a letter of concern addressed to Prime Minister Scott Morrison regarding Australian High Commissioner to India Barry O’Farrell’s meeting with the Rashtriya Swayamsevak Sangh (RSS) this week. … The Humanism Project’s letter expressed the organisation’s aversion by stating that the Australian Envoy to India provided “legitimacy to RSS”, calling it “an organization that never made any secret of its love for Adolf Hitler”. The non-profit’s memo also said that the RSS “runs quasi-militant outfits that have often been charged with participating in communal riots and running campaigns against the religious minorities of India” and brought up the murder of Australian missionary Graham Staines and his two sons in 1999 at the hands of “Bajrang Dal, whose leader Dara Singh was convicted for the heinous hate crime and murder, in 2003”.…Read more

Many political leaders and women’s rights activists in India have come together to demand justice for a Muslim woman, who was allegedly burned to death by a Hindu man and his friends in Vaishali district in the eastern province of Bihar. Gulnaz Khatoon, 20, was burned after the accused poured kerosene over her in Rasoolpur village on October 30. She succumbed to her burns on Sunday. The woman’s family alleges the police delayed in taking action against the accused, who were identified as Satish Kumar Rai, Chandan, and Vinod Rai.… Satish Kumar Rai had been harassing Gulnaz to marry him, the victim’s family said, adding that the woman refused to enter into an interfaith marriage with Rai. Enraged at her refusal, Rai and his friends killed her, the family said.…Read more

Maharashtra BJP MLA among 16 booked over transfer of farmers’ money

‘He is almost on deathbed’: Bombay HC issues order to move Varavara Rao to Nanavati Hospital

For first time in history, no Muslim in Bihar ministry

SC was never perfect, but the signs are that it is slipping into judicial barbarism – By Pratap Bhanu Mehta

How Mohan Bhagwat outlined a vision for a casteist, theocratic Hindu state on national TV – By Sagar